At Passfolio, we’ve built our app and server software on top of a variety of open source software, most of which is based on TypeScript, React, and/or React Native.

In support of our mission to provide US financial market access to people from around the world, and to do so with a very small and efficient development team, we’ve had to identify and solve an interesting set of problems, which we feel others can also benefit from.

Some of the tactical goals we have are:

We still have a lot of work to do towards these goals, but we’ve open sourced a few packages that we knew were generalizable and stable, because we think others can benefit from these packages.

The first three packages we’ve published cover the most important mechanisms we prefer for state management and coordinated async task execution.  These packages, which build on each other, are:

When dealing with many and/or highly bursty async tasks, ex. for downloading, combining, and transforming data, managing compute priority becomes critical. Lower end devices with limited memory, single core compute performance, or even just older, poorer performing JavaScript engines are especially affected when too many async tasks pile up.  However, even for the most modern systems, ensuring that enough free compute time is frequently available, is critical for making the system feel smooth.

As the number of tasks increases, ensuring that they run in a reasonable order is also important -- and initial scheduling order is often inefficient, especially with a very dynamic SPA, where a user might have moved on from the need for a previously requested, but still incomplete, piece of data.

It’s configurable so that it can use different mechanisms to make sure it behaves well with the UI layer.  For example, with React Native, we want to use InteractionManager.runAfterInteractions to schedule tasks after the UI is given a chance.

There are myriad state management tools and mechanisms for React.  Redux is very popular and much of what's built-in to React, especially modern, functional React, is a great start.

The first iteration of the Passfolio native application made use of Redux Sagas.  While this was conceptually interesting in some ways, we found that general debugging and optimizing state management and re-rendering was harder, more time consuming, and less natural that it needed to be.  Redux Sagas real strength is probably in testability, but the other drawbacks made it clearly not worth it for our project, especially as it grew in scope and complexity.

Two-way data bindings are common in many APIs, and help achieve the above stated goals, but they’re not available directly in React.

Our package provides two-way data bindings, bridging for non-bound data, derivative computation support, conveniences for observing changes, and a component for rendering (and re-rendering) based on bound data.  We’ve used our approach mixed with React Sagas in the past, but we’ve since migrated all our state management to use a combination of pure React tools and react-bindings and we find this setup to be powerful, flexible, intuitive, and incredibly efficient.

Because dealing with asynchronously available data is so prevalent in our codebase, we further specialize our bound data support into a concept we call waitables, which are effectively a combination of state information and an associated function that produces data.  For asynchronous data, we need to know:

Additionally, we need to:

We built react-waitables on top of react-bindings to take advantage of it’s already optimized rendering, derivation, and observation capabilities.

When we think about asynchronously available data, the most common tool to work with is async functions, which run and either produce a value or throw an error.  However, react-waitables supports more than just straightforward async functions.  Sometimes asynchronous data is:

To deal with these cases, waitables support both push and pull models. Waitable functions can update their bound data as many times as needed. Waitables can also be “reset”, so that the primary waitable function is re-run.

These packages are the core of our state and data management strategies with Passfolio and we think they’re useful for many projects and teams.  We hope you’ll check them out and love using them!

For examples and API documentation, see the linked NPM pages.

If you’re an engineer excited about our stack and interested in joining Passfolio please email osblog at passfolio.com!

Thank you! Your submission has been received!
Oops! Something went wrong while submitting the form.
Leituras Sugeridas 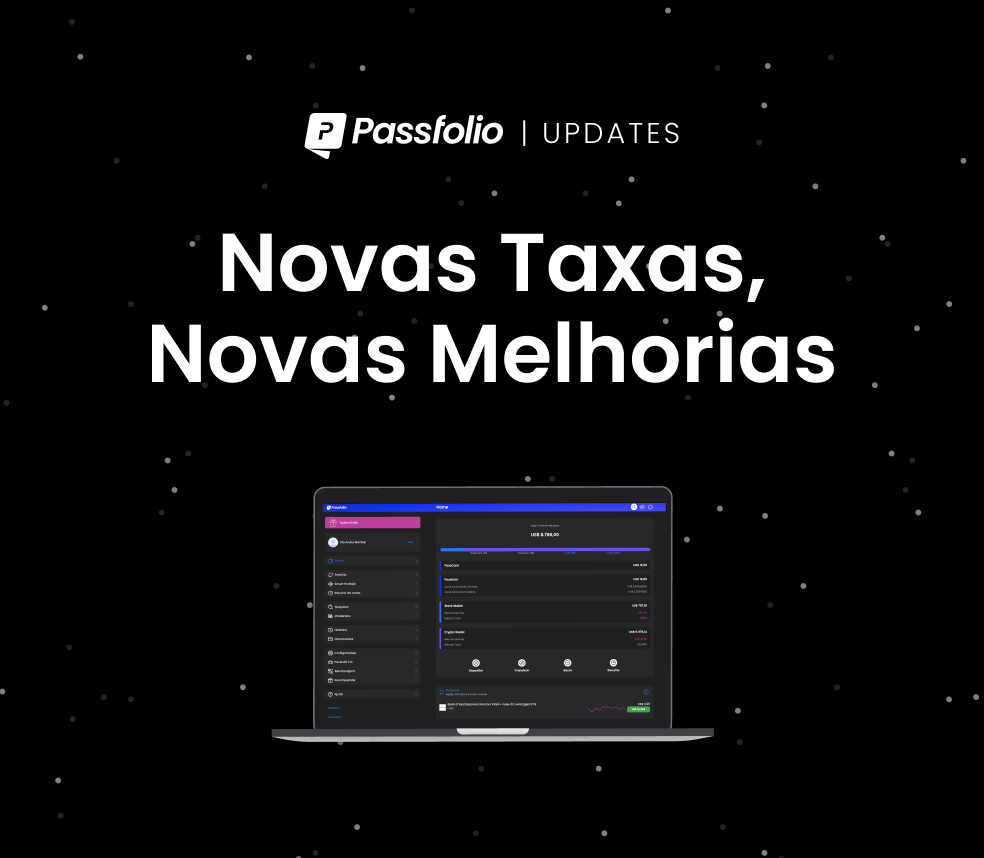 Investors should consider the investment objectives, risks, and charges and expenses of an Exchange Traded Fund ("ETF") carefully before investing. Before investing in any ETF, you should consider its investment objective, risks, charges and expenses. Contact us at support@passfolio.com for a prospectus containing this information. Read it carefully.

ETFs are subject to market fluctuation and the risks of their underlying investments. ETFs are subject to management fees and other expenses. ETF shares are bought and sold at market price, which may be higher or lower than their NAV, and are not individually redeemed from the fund. Investment returns will fluctuate and are subject to market volatility, so that an investor's shares, when redeemed or sold, may be worth more or less than their original cost. ETFs are subject to risks similar to those of stocks. Some specialized exchange-traded funds can be subject to additional market risks. Leveraged and inverse exchange-traded products are not designed for buy and hold investors or investors who do not intend to manage their investment on a daily basis. These products are for sophisticated investors who understand their risks (including the effect of daily compounding of leveraged investment results), and who intend to actively monitor and manage their investments on a daily basis.
‍
Be sure to consider your own financial situation, perform thorough research, and consult with a qualified tax professional before making any investment decisions concerning REITs. Investments in REITs and other real estate securities are subject to similar risks as direct investments in real estate. The real estate industry is particularly sensitive to economic downturns.

To purchase securities using cryptocurrencies, you must first convert it into U.S. Dollars using Passfolio Financial LLC. You must then move the U.S. Dollar proceeds to your brokerage account at Passfolio Securities LLC where you can use it to buy securities.

Online trading has inherent risk due to system response, execution price, speed, liquidity, market data and access times that may vary due to market conditions, system performance, market volatility, size and type of order and other factors. An investor should understand these and additional risks before trading.
‍
Content, news, research, tools, market data and securities symbols are for educational and illustrative purposes only and do not imply a recommendation or solicitation to buy or sell a particular security or to engage in any particular investment strategy. The information provided is not warranted as to completeness or accuracy and is subject to change without notice. The information provided should not be considered legal or tax advice. Consult an attorney or tax professional regarding your specific situation. The projections or other information regarding the likelihood of various investment outcomes are hypothetical in nature, are not guaranteed for accuracy or completeness, do not reflect actual investment results and are not guarantees of future results.
‍
All investments involve risk, losses may exceed the principal invested, and the past performance of a security, industry, sector, market, or financial product does not guarantee future results or returns. Consider the investment objectives, risks, charges, and expenses of a fund before investing. Contact us for a prospectus containing this information.
‍
Please remember that diversification is not an investment strategy without risk, and in certain circumstances, it may not fit your investment objectives. Past performance is no guarantee of future results.
‍
Certain services (“Services”) offered through our mobile app are offered only in jurisdictions where it is legal to do so. The availability of the Services over the Internet is not a solicitation for or offering of the Services to any person in any jurisdiction where such solicitation or offering is illegal. We reserve the right to limit the availability of the Services to any person, geographic area, or jurisdiction, at any time and in our sole discretion. We make no representation that the Services are appropriate or available for use in locations outside of United States, or that accessing our mobile app is legally permitted in countries or territories where the Services may be illegal. If you access the Services from other locations, you do so at your own risk and are responsible for compliance with local laws. In particular, we are not authorized by the Brazilian Securities and Exchange Commission (CVM) to offer securities distribution services to investors who reside, are domiciled or incorporated in the Federative Republic of Brazil. The Services are not specifically directed to investors who reside, are domiciled or incorporated in the Federative Republic of Brazil and should not be understood as an offer of services directed to such investors.
‍
According to CVM's Legal Opinion No. 33, dated September 30, 2005, Passfolio contracted RB Capital Investimentos Distribuidora de Títulos e Valores Mobiliários Ltda. ("RB Investimentos"), a Brazilian securities distributor duly authorized by the Central Bank of Brazil and the CVM, through which RB Investimentos makes Passfolio's services available to investors resident, domiciled or incorporated in the Federative Republic of Brazil. The services provided by RB Investimentos should not be understood as an offering of securities directed to such investors. Although RB Investimentos has been hired to provide Passfolio's services, Passfolio offers its services exclusively in the United States and under the rules and regulations applicable in that country. As these services are investments made directly in the United States through Passfolio, they are not registered with or subject to the supervision of the CVM or any other Brazilian regulatory agency, so the investor must have knowledge of the language and local regulation. Investors resident, domiciled or incorporated in the Federative Republic of Brazil who have become or will become clients of Passfolio through RB Investimentos may contact the following e-mail addresses: suporte@passfolio.us / contato@rbinvestimentos.com

Where an investment is denominated in a currency other than the investor’s currency, changes in rates of exchange may have an adverse effect on the value, price of, or income derived from the investment.

Securities products are: Not FDIC insured · Not bank guaranteed · May lose value

Trademarks and logos are the property of their respective owners and do not represent endorsements of any kind. Unless otherwise noted, Passfolio Securities, LLC and its affiliates are not partners, affiliates, or licensees of these companies.

Banking services are provided by Synapse's bank partners, Members FDIC. Synapse is one of our backend software providers, and partners with financial institutions to provide ACH and Wire Services. By agreeing to Passfolio’s TOS and Privacy Policy, you also agree to Synapse’s and .